Some minor cosmetic procedures, such as dermal fillers and Botox injections, don’t involve surgery, but this does not necessarily remove all risk. Studies show that these procedures are very safe when performed by trained and qualified professionals. Before signing up for a cosmetic procedure, make sure you have done all of your research. Below is a checklist you can follow to help you organize the important aspects.

First and foremost: It is important that you use a reputable, board-certified surgeon with the proper credentials and experience.

Such checks are particularly important because of the rapidly growing market for injectable cosmetics, which has created opportunities for bad practice. People should try to be safe when choosing a practitioner to ensure that they are in the best hands possible, and can look forward confidently to receiving a positive outcome.

Some of the things to check about the provider include:

Title – some providers use unrecognizable or unusual titles, such as ‘Advanced Aesthetics Therapist/Practitioner’ to attract and deceive consumers. When checking the qualifications of a cosmetic provider, make sure that the person performing the procedure uses the actual title of a doctor, registered nurse, or dentist.

Training – providers need proper training to provide cosmetic treatments, such as how to deal with adverse reactions, allergic reactions, and emergencies. Board certification is an excellent way to denote whether or not a plastic surgeon is fit for the job.

Location – to avoid infection or permanent physical damage, in severe cases, treatments should only be carried out in a safe, clean, and appropriate clinical facility. Many surgeons offer a complimentary consultation which allows you to scope out their facility and ask questions.

Lastly, you should research your procedure. A lot of information can be gathered about certain procedures and first hand-experiences from realself.com – a community devoted to plastic surgery experiences as a whole. Many surgeons offer their opinions on the questions this platform’s users provide. It is worth looking in to. 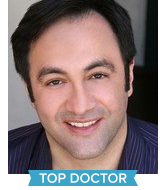 Dr. Golshani has provided 179 expert answers to date and has received the “Top Doctor” seal of approval from realself moderators to distinguish his presence. His answers vary across all of the cosmetic procedures that he provides as a double board-certified Beverly Hills plastic surgeon.

Choosing to change a physical aspect of yourself through surgery is a very personal and emotional thing. It is not unusual for a person considering cosmetic surgery to experience mixed feelings of excitement and jitters during consultation followed by panic and self-doubt after the procedure.

Depending on your procedure, it can take several months for you to see the final results, during which time you may experience a range of emotions. These feelings are completely normal and short-lived, but it helps to be prepared for the vacillating emotions associated with cosmetic surgery recovery.

Here are some of the emotional phases you can expect:

The first few days following cosmetic surgery are usually the hardest. This feeling of panic is likely to kick in 3 to 5 days after the procedure. During your first week of recovery, you are required to get plenty of rest. The lack of activity leaves you with a lot of time to ponder your actions and doubts.

As your body continues to heal in the second and third week of recovery, you will begin to see the results of the procedure. The changes to your former self will be more apparent, which may lead to conflicting feelings – especially if the transformation was drastic.

“Maybe this was a mistake!”

Once the changes become apparent, you may start to experience feelings of self-doubt for the next 2 to 3 months every time you look at yourself in the mirror. If the procedure was in preparation for a future event, such as a wedding or holiday, you might feel empty after the excitement and anticipation of the event passes.

I’m so glad I had the courage to get the procedure!

Most of the people who undergo cosmetic surgery are pleased and satisfied with the results and their new self. 3 to 6 months after the procedure, you will be in a position to realize the impact of the procedure, which will boost your confidence.

Feelings of panic after plastic surgery may last for a few days to several weeks, and are strongest when you’re least occupied. To prevent and manage your post-op stress, you should prepare appropriately before the procedure by:

Lastly, different procedures have different healing processes. So, be patient and don’t rush any judgments until the final results show. If you experience any problems during your recovery, don’t hesitate to contact your surgeon for assistance. 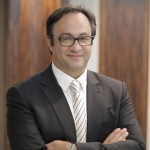 We’re sure you’ve heard it at least once: “Actions speaks louder than words.” At the end of the day, this phrase still holds merit. Here at Avosant, we believe actions do speak louder, which is why we would love to showcase our latest before and after results from patients who have allowed us to share their photos. 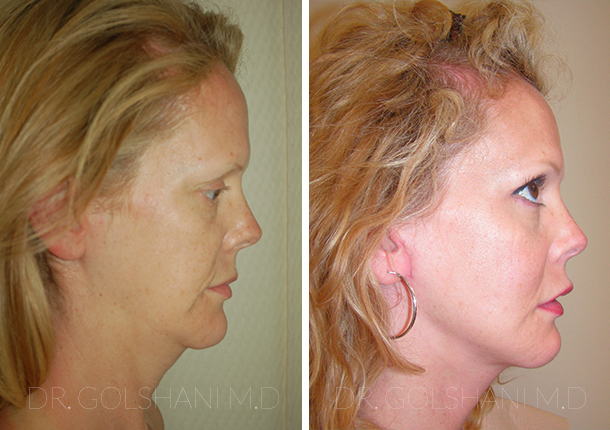 Necklifts are not as popular as other procedures, but they still have such a lasting impact on patients who seek to reverse the signs of the natural aging process. The patient shown above was shocked when she saw how much younger she looked in the mirror after seeing herself for the first time after the procedure.

View more Necklift before and after photos in Beverly Hills by Dr. Golshani. 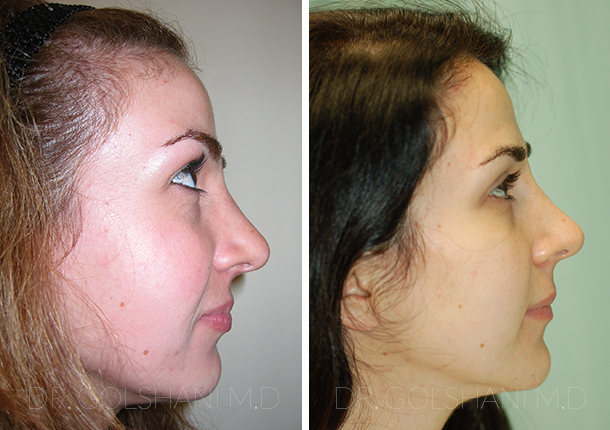 The nose is a very delicate structure that bears so much weight when taken into consideration in terms of your entire facial profile. Here we can see a subtle change when examined closely. The keyword here was “subtle”, however this subtle change completely changed the nose profile. She was ecstatic with the results!

View more Rhinoplasty before and after photos in Beverly Hills by Dr. Golshani.

It’s important to keep in mind that many tummy tuck patients have already tried various diets and exercise programs & regimens that have not made any significant, lasting results. In this case, plastic & reconstructive surgery should be considered. As we can see above, the results are essentially night and day.

View more Tummy Tuck before and after photos in Beverly Hills by Dr. Golshani.

With over six million Botox treatments administered each year, Botox, or Botulinum toxin, injections are certainly the most popular cosmetic surgery in the world. Botox is used to reduce wrinkles and fine lines by paralyzing underlying muscles, though it can also be used to treat migraines, excessive sweating, muscular disorders, and some types of bladder/bowel disorders.

So, What is Botox?

Botox is made from a neurotoxin produced by Clostridium botulinum bacterium called botulinum toxin. The bacterium exists in the natural environment in its inactive form, and can be found in cultivated soils, the forest, and in sediments of streams, lakes, coastal, or other untreated waters, as well as in the intestinal tracts of fish and mammals.

The bacteria and spores are harmless in their inactive form, but once they transform into vegetative cells and start multiplying, they start producing the highly poisonous neurotoxin responsible for botulism (a life-threatening illness) – botulinum toxin. The toxin is so poisonous that a couple of kilograms could kill the entire human population.

That said, botulinum toxin has been proven to be a valuable therapeutic protein when the dosage, frequency of administration, and variety of treated clinical conditions is put into consideration. It has medical applications to treat specific muscular conditions, as well as cosmetic applications for the removal of wrinkles by paralyzing muscles on a temporary basis.

The bacterium – Clostridium botulinum – was first discovered in 1897 for causing food poisoning. Between the 1920s and ‘40s, scientists discovered that it was possible to purify the bacteria in crystalline form, and use it in small doses to relax overactive muscles and spasms. It was then used in experiments on monkeys in the 1970s, and then used on humans in the 1980s to treat eye disorders.

In 1989, the Botox substance was approved by the FDA as treatment for eye problems resulting from malfunctioning muscles, like strabismus (wandering eye), amblyopia (lazy eye), blepharospasm (twitching eye), and squinting. In the course of the treatments, eye specialists realized that when the drug was administered, the area around the eye seemed more relaxed and wrinkles less prominent.

In 2002, the FDA declared Botox safe for cosmetic use. So, it could now be used to improve the appearance of facial wrinkles under specific regulations. The effect lasts between 4 and 6 months.

The Popularity of Botox

By 2006, Botox had transformed into a billion dollar industry, and continues to be used for both cosmetic and medical purposes. In fact, it is expected to hit the $4 billion mark in the international market by 2018, with the US contributing about 50 percent. Its rapid growth can be attributed to the fact that is non-invasive, safer compared to surgery, and cost-effective, plus celebrities have relied on Botox injections to appear years younger on screen, boosting consumer confidence in the product.

If you’re considering abdominal surgery of some sort, among the popular procedures are tummy tuck and liposuction. After considering your options and the results you’d like, you and your doctor decide you’re in for both procedures! However, one question you might be asking then is, which comes first? Liposuction or tummy tuck?

Today’s surgeons are confident they can combine the two procedures if the liposuction is needed only on the sides and hips, and Beverly Hills Plastic Surgeon, Dr. S. Daniel Golshani, agrees:

“Undergoing full abdominal liposuction when the skin is very loose can result [in] lumpy bumpiness and a poorer outcome at the end which is hard to fix[.] If you find it hard to lose weight before surgery (many people do), I would have you consider a full tummy tuck to remove the [loose] skin and tighten your muscles first.”

Liposuction can be performed at the same time as a full tummy tuck, if it’s a partial procedure, focusing on the area around the abdomen. However, Dr. Golshani has found that liposuction of some direct fat from the upper abdominal skin is safe. When consulting with a potential candidate for both procedures, he was quoted saying:

“This will get you really flat and much curvier, and will make it very easy for you to begin enjoying your new look and start a [lifestyle] protocol including a healthy diet and exercise routine.”

As long as you use a board-certified surgeon for your plastic surgery needs, you will no doubt find success in striking a balance between the two procedures. Of course, every case is different, but what remains consistent is the fact that your surgeon will work to deliver the best results possible for your body, in the safest way. After the surgery, it’s your job to keep off that weight! Your surgeon will guide you, but the future of your tummy is in your hands.